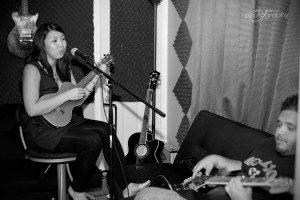 Three days, a series of laugh cramps, and tons of caffeine later, I find myself inspired to blog again because I can’t imagine not capturing this moment in my life somewhere (other than in a song).

This past weekend, I began recording at Ambiance Recording Studios, LLC to cut my very first record ever! Life has definitely been good to me in 2010. The first couple of days of recording, we did scratch tracks, drums, and bass. The best part about it was the good vibes that everyone brought to the record. At one point, we were all singing songs acapella while making sandwiches for lunch. Philip from The Fishermen Band sat in on a couple of sessions to offer his ear on production value, and Andy Westcott happened to be around on Monday night and recorded some slide guitar for a track. The musical community that passes through Josh Insel’s Ambiance Records is incredibly talented and never ceases to amaze me.

Today I walked around D.C., visited the Hirshhorn Museum, and (finally) saw Inception. While I was perusing the streets of the city, I thought about where I was one year ago: Still undecided about law school, uncertain about my new job, homesick, and socially disconnected from the city. Oh, how quickly tables have turned once Music entered the picture. I started performing in D.C., found a musical community that I love being a part of, met amazing musicians to play with, and am cutting a record seven months after it all began. No one could ask for more, and I feel so blessed. Within a short period of time, I underwent a catharsis and realized that this is what I’d been waiting to do my entire life. The only logical thing to do now is to keep doing it!

So much work has been put into this record already, and I’m learning so much about the process of recording along the way. I will continue to look back on the songs recorded and remember this wonderful part of my life. These songs are a product of love, hard work, and good vibes. I can’t wait to share this album with the world.